Talk about last minute panic! My husband’s parents were soon to celebrate their Ruby Wedding Anniversary and we still could not decide what to get them. I searched the web for days trying to get inspiration but nothing seemed good enough or appropriate. I wanted to combine something they enjoyed with something romantic, but still nothing came to mind. That was until my Mother-in-Law happened to mention they were going on a cruise the following year and could not wait as they had enjoyed previous cruise ship holidays over the years. I had no idea they had been on cruises in the past, and then it hit me, I kept coming across web sites for river cruises which looked ideal for romance and relaxation, and realized it would be the perfect gift.

Looking through all the options I eventually settled on a perfect river cruise called the Viking Paris & the Heart of Normandy which was to sail on either the Viking Pride or Viking Neptune  ships. This combined a trip to Romantic Paris as well as a visit to the beaches of Normandy which would also be of great interest to both my in-laws as their relatives were involved in both World War One and World War Two.

The journey would start in London for a flight to Paris where the river cruise trip would begin and  the next 2 days would be spent exploring Paris with all its history and romance. 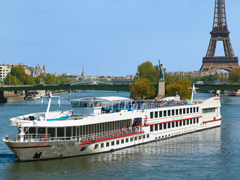 Day 3 would first be a trip to the beautiful town of Giverny where Claude Monet lived followed by a visit to the historic and provincial town of Vernon where the 11th-century Church of Notre Dame can be found.

Day 4 would involve a leisurely morning cruising along the Seine to eventually arrive at Rouen, the capital of Normandy where one of the of the patron saints of France, Joan of Arc, was sentenced to death and martyred at the Market Square.

Day 5 would be the highlight for my in-laws as there was to be a full days visit to the beaches of Normandy including a drive past Gold Beach, Courseulles sur Mer and Juno Beach on the way to visit World War 2 landmarks such as Omaha Beach and the Arromanches Debarkment Museum. Furthermore, there would also a visit to the American Military Cemetery which is quite haunting as I have visited it before and found the total silence very disorientating.

Days 6 & 7 would be especially interesting and insightful as there are trips to the small town of Les Andelys with its imposing castle and  Château Gaillard which was built in 1196 by Richard the Lionheart. There is also an optional tour to the luxurious Palace of Versailles, the former home of Louis XIV, before returning back to Paris. 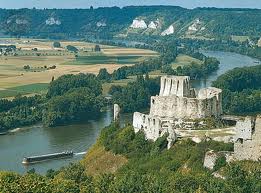